It is so hard not to fall for Yakisoba when you hear that sizzling from the delicious fruity sauce poured over noodles on a hot plate. Yakisoba is stir fried noodles cooked with a tangy signature sauce and vegetables.

It’s easy to make the popular Japanese street food authentically! Bring the atmosphere of a Japanese street market into your kitchen with the irresistible aroma and sizzling sound of this classic noodle dish. Why not try it because all you’ll need is a frying pan to achieve this at home!

Yakisoba is now a well-known Japanese word in English speaking countries, but just in case you don’t know what it is: Yaki = grilled/fried and Soba = noodles. Although it’s called Yaki “Soba”, it is actually made from ramen noodles, not soba noodles. The origins of the dish are from China but it was adapted into Japanese cuisine and made popular in Japan when it appeared in street food stalls after the second World War. Check other Japanese food terminology here.

There are many different types of noodles out there, and you may be confused which noodle to use for making Yakisoba. The noodles we use in Japan are wheat-based noodles. They look the same as egg noodles but they are not. They look like they contain egg but it is because of the addition of an alkalising agent called “Kansui”, which is water that is rich in sodium carbonate and potassium carbonate.

If you are interested in knowing more about Asian noodles, read SBS’s “Know your noodle:The ultimate guide to Asian noodles“. Because Yakisoba is a very common dish in Japan, you can easily buy Yakisoba noodles at the supermarket. They are usually sold as steamed noodles in Japan and are quick and easy to heat.

The great thing about it is that you can really add any ingredients you like. The noodles are most often grilled along with pork, chicken, beef, egg, seafood such as shrimp and squid. Commonly used vegetables are cabbage, capsicum, onion and scallions. However, all this can be adapted to suit your flavour palette. You can add more vegetables to make it healthier or you can make it with only vegetables to create a vegetarian version.

The thing that makes Yakisoba so delicious is the sauce. I love Yakisoba Sauce by Otafuku.

, which is specially made for seasoning Yakisoba. However, if you would like to make your own sauce, which is based on Worcestershire sauce, follow this recipe.

: a type of red pickled ginger which adds flavour and pretty colour to the brown dish.
Bonito Flakes: add flavour and texture.
Aonori Flakes: seaweed flakes give even more of a flavour kick to an already delicious stir-fried noodles

Where to Buy Ingredients For Making Yakisoba at Home

Yakisoba noodles and the garnishes can be found at Japanese supermarkets or online.

Noodles: Do not buy soba noodles, these are made from buckwheat and are not used for yakisoba (despite the name). You need to buy yakisoba noodles which can be found at Japanese grocery stores, online, or you can use ramen noodles.

Fillings: You can really use whatever proteins and vegetables you like so you can choose what you like from your supermarket.

Yakisoba Sauce: Nowadays you can find this sauce more frequently outside of Japan. If you are in Australia, I actually saw this recently at Woolworths. Otherwise, you can make it yourself or find it at a Japanese supermarket or on Amazon.

, Aonori Flakes, and Bonito Flakes can be found at Japanese supermarkets. (Or click each link to find them online.)

We want to make the same Yakisoba that you can buy from street food markets that are cooked on a huge iron plate (called “Teppan”). I will give you 3 tips to achieve street-food-like Yakisoba at home with your frying pan!

1. Stir fry the noodles first till they are browned

Stir fry the noodle first till it is browned: Loosen the noodles by pouring hot water over them. Using a pair of chopsticks or by your hand, loosen it and drain water in a sieve. Stir fry the well-drained noodle over medium to high heat in a frying pan first, push the noodle with an egg flipper to brown the noodles. Turn the heat off and set aside the noodles in a bowl.

After you cook and brown the pork, add the cabbage and capsicum and cover the vegetables with already cooked and browned noodles. Use the noodles as a lid to steam cook the vegetables for a few minutes over medium heat.

We don’t want to make soggy Yakisoba. I have a 10 inch (26cm) frying pan and I cook one noodle packet at a time (above photo I cooked for two) to make NOT soggy Yakisoba and cook it over high heat and as fast as I can after pouring the sauce.

Sounds great so far?  Wouldn’t it be great if the noodles and sauce come in one packet together? Japanese people are known for their great customer service and it’s the same in the food industry too! You can purchase two or three noodle balls and sachets of powdered sauce in one packet. You can buy Japanese style noodle with Sauce

A: Yakisoba noodles are made from wheat and are not low carb so I don’t think Yakisoba is keto friendly.

Q: Does Yakisoba have gluten?

A: Yes, Yakisoba noodles and sauce both contain gluten.

Q: Does Yakisoba have dairy?

A: Yes, Yakisoba does have dairy.

Q: Does Yakisoba have nuts?

A: No, this Yakisoba recipe does not contain nuts.

If you made the recipe and liked it, please rate in the recipe cared and leave a comment below. Also, don’t forget to follow me on Youtube, Pinterest, Facebook , Twitter and Instagram to keep up to date with all the latest happenings on Chopstick Chronicles. Don’t forget to use the hashtag #ChopstickChronicles on Instagram so I can see your wonderful creations! Finally, don’t forget to subscribe to my weekly newsletter by adding your email address underneath my profile photo. 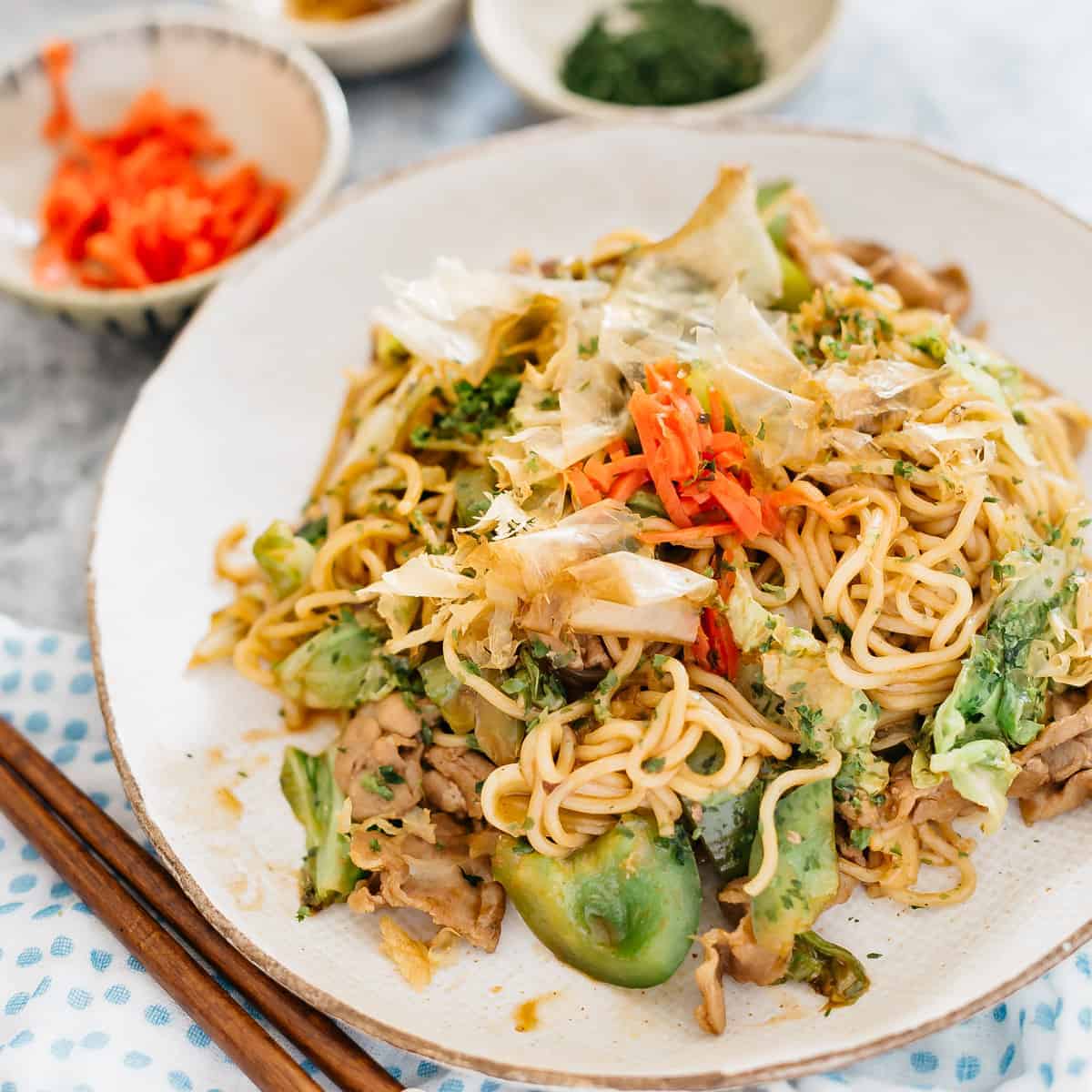 Yakisoba is a popular Japanese dish made from grilled/fried ramen noodles tossed with meat and vegetables and flavoured with a delicious Yakisoba sauce!

Chopstick Chronicles is a participant in the Amazon Services LLC Associates Program, an affiliate advertising program designed to provide a means for sites to earn advertising fees by advertising and linking to Amazon.com. As an amazon associate I earn from qualifying purchases.