There are plenty of unique ramen restaurants around Japan that proudly boast unique attributes like Michelin stars, idol singers, and straight-up fire, but only one can lay claim as being the country’s very first ramen restaurant, and that accolade goes to Rairaiken, which opened in in Tokyo’s Asakusa neighborhood in 1910.

Back then, Rairaiken was staffed by cooks from Chinatown in Yokohama and was so popular it served as many as 3,000 customers a day. However, Rairaiken’s success didn’t last forever, sadly, as the business eventually closed its doors in 1976, after there were no candidates willing to take on the family business.

Now, 44 years after its closure, Rairaiken has been brought back to life, thanks to the efforts of the Shin Yokohama Raumen Museum, who has been researching the original restaurant with Ozaki’s grandson, Kunio Takahashi, and great-great-grandson, Yusaku Takahashi.

Kunio’s first-hand experience of eating ramen at Rairaiken’s original location has helped the museum to faithfully recreate both the atmosphere and the menu from the restaurant, right down to the ingredients used to make their noodles and toppings.

We paid a visit to the newly opened Rairaiken, which is now located inside the Shin Yokohama Raumen Museum, and when we arrived, we found the signage paid homage to the original store sign, using the same decorative font for the name of the restaurant, with “浅草名物” (Asakusa Meibutsu [“Asakusa Specialty”]) also appearing as it did on the original storefront.

Like many ramen restaurants, the modern-day Rairaiken takes orders through a ticket machine, and the top recommendation here is the standard “Raumen”, which is priced at 1,100 yen and limited to 100 meals a day.

Another Raumen option uses machine-made noodles, as opposed to handmade ones, and is slightly cheaper, at 930 yen. There’s also Wonton noodles for 1,130 yen and Char Siu noodles for 1,400 yen, and the most expensive option on the menu is Char Siu Wonton noodles, priced at 1,600 yen. There are some non-noodle offerings available too, namely shumai dumplings, which start at 150 yen each.

We really wanted to try the expensive Char Siu Wonton noodles but they were already sold out when we visited on a weekday evening. So instead, we ordered a bowl of Raumen and three shumai dumplings.

▼ After a short wait, the legendary ramen finally arrived.

The ramen at this revival restaurant has been painstakingly reproduced to replicate the flavors of the original dishes, even using flour that’s said to be the genetic descendant of the variety first used by Rairaiken. This is just one of the many fine details you’ll come across at the new restaurant — even the package on the chopsticks is beautifully adorned. 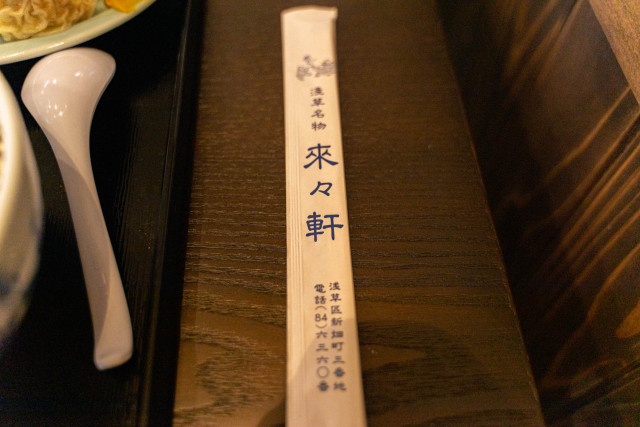 Rairaiken specialised in soy sauce broth ramen, and that same broth appears in these new noodle dishes. As it sparkled deliciously in the light, we were reminded of the fact that the history of all soy sauce ramen in Japan today can be traced back to this one soy sauce ramen that started it all over a century ago. 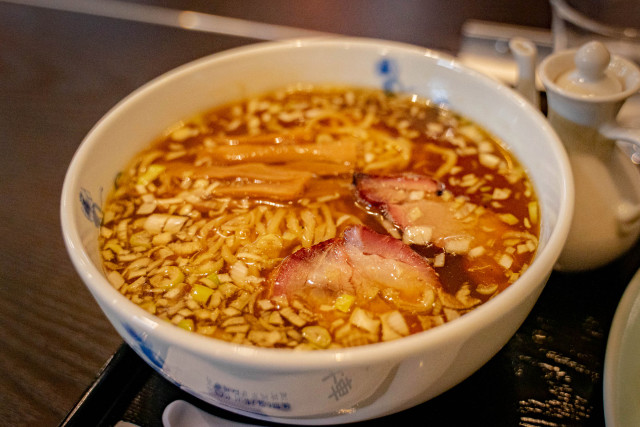 Humbled, we took up our chopsticks and picked up a mouthful of the legendary ramen. The noodles had a smooth surface and a nice, rectangular cross section, and their mouthfeel was perfectly soft and chewy.

▼ Slurping the noodles together with the broth allowed the flavors to meld beautifully on the tongue. 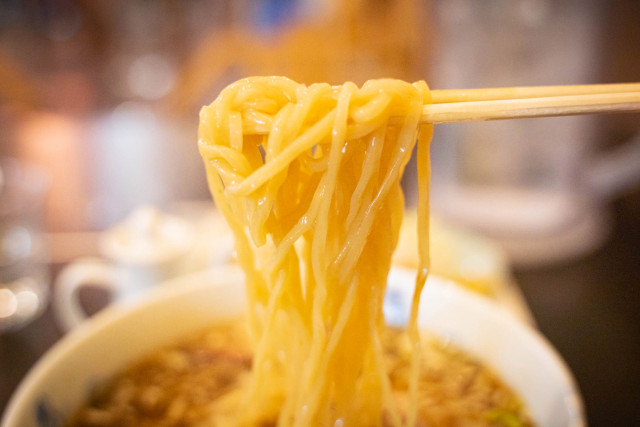 Looking at the char siu, we could see it wasn’t the soft and simmered pork often used in ramen these days, but hard and rich-flavored roast pork. This char siu was an apt reproduction from the days of yore, and it gave the whole dish an added depth of flavor. 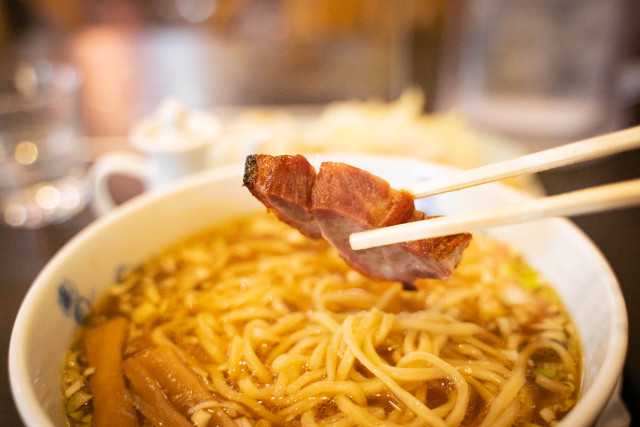 ▼ The soy sauce broth glistened with oil, and its flavor was magnificent. 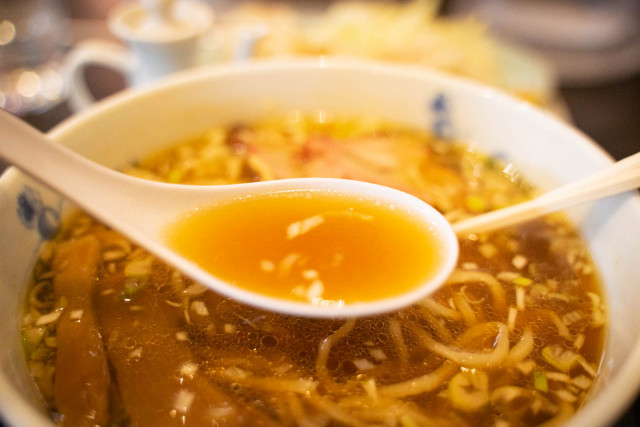 A lot of ramen places these days serve gyoza pot stickers as a popular side dish, but before World War II, shumai dumplings were the common option. Eating these dumplings on the side instantly transported us back to those pre-war days when ramen was just being introduced to the country. 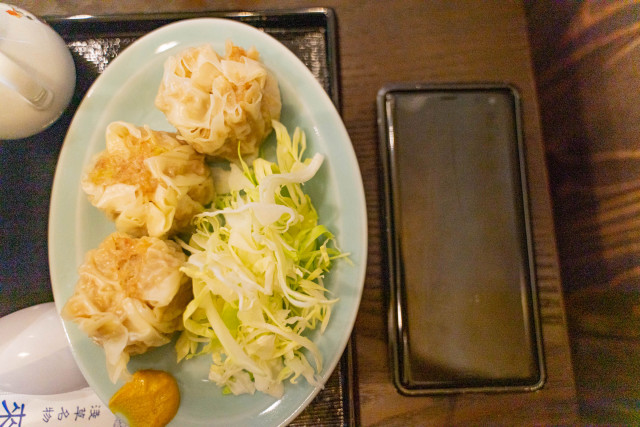 These shumai weren’t anything like the ones we usually eat either, as they were much larger than the bite-sized ones often served in Japan. The generous fillings were delicious and complemented the salty soy sauce ramen so well we were tempted to order another plate of them.

As we ate our noodles and shumai, we were surprised by how understated they were. Lots of ramen joints these days like to play with conventional ingredients to entice customers, but there were no such frills here. Thinking about it, that’s exactly what makes this ramen so good — when you’re the originator of a new dish in a new country, you don’t need to dress things up with unnecessary details.

This was a hearty bowl of noodles that filled both our bellies and hearts with warmth. Despite being simple, or maybe because of it, this bowl of ramen turned out to be one of the best we’ve ever tasted, and it left us with a deeper appreciation for ramen and its long history in Japan.

If we were a customer at Rairaiken tasting ramen for the first time ever, we would definitely be blown away by the taste of this meal. So it’s nice that now, 110 years after it was first opened, Rairaken is once again making its customers appreciate ramen anew…even if they’ve tried everything from chocolate to piranhas with their noodles.

— We try out Pizza Hut Taiwan’s Ramen Pizza, try to figure out its national identity

— This ramen restaurant has no name, is one of the best hidden finds in Japan