Umeshu Plum Wine is my favourite drink. I am not a regular drinker but when I pick something to drink socially, Umeshu Plum wine is the one. It is often served as an aperitif at Japanese restaurant and staple drink menu at Izakaya Tavern because this plum wine has an increasing appetite effect!

What is Umeshu Plum Wine?

Ume is plum and shu means alcohol so Umeshu literally means plum wine. It is made from unripe green ume plum fruits, rock sugar and liquor. It is a popular drink menu among Japanese woman because it’s refreshing and has a sweet fruit flavour. Choya is well known for various plum wine products and is a popular brand in Japan. It is easy to make at home. So let’s make plum wine together!

Ume shigot is referred to the works dealing with Ume plums when it is in season. It includes making plum syrup, umeshu and umeboshi. My grandmother had a few Ume plum trees in her veggie patch and I used to pick green ume plums with her and watched her make Umesh. We (her grandchildren) were not allowed to drink but she sometimes gave us the plum used to distil the Umesh she made. It was my fond memory and certainly, it was a treat.

I don’t have much choice in Australia, so I was lucky to get ume plums. Mostly I have to use whatever is available. However, if you have a choice, choose one that is fresh with no wrinkles or scratches, and is glossy. Also, larger fruit has a lot of juice than small fruits, so it is easy to extract. You can use both unripe and ripe ume plum. The plum wine made from unripe plum will have a crisp taste and will have a mellow fruity taste if it is made from ripe plums. You may find plum fruits from local produce markets if lucky or Japanese grocery stores. That’s where I found mine.

In Japan, it is commonly made with alcohol called white liquor with 35% alcohol. Because the tasteless and odourless white liquor does not spoil the original aroma and flavour of ume plums. However, as long as the liquor has above 35% alcohol, you can use any such as brandy, rum and gin. I used vodka. Be aware not to violate the liquor tax law of your country. In Japan making fruit wine with less than 20% liquor is illegal. Another reason that you need to use liquor with high alcohol content is that the juice and moisture of the plum lower the alcohol content, making it more susceptible to spoilage due to microorganisms and bacteria. Using high alcohol content make the umeshu become less likely to be spoiled and keep a longer period.

Usually, rock sugar is used to make umeshu with about 50-80% of the weight of the ume plum fruits. You can use granulated sugar, brown sugar or honey though they are difficult to dissolve and tends to accumulate at the bottom of the jar. The reason for using rock sugar is that it can extract ume plum fruit essence slowly.

The Science Behind Using Rock Sugar

When the rock sugar, the plum fruit and liquor are mixed, the plum (which has a higher sugar content) will absorb liquor into the fruits and the plum fruit will swell. Then, the plum extract and scent begins to dissolve into the white liquor that has been absorbed. On the contrary, when the rock sugar slowly dissolves into the liquor, then draw back into the liquor with plum fruit extract because of osmotic pressure. You can start to drink umeshu because the balance of osmotic pressure said to be settled down after 3 months to 6 months.

The most suitable container is a glass bottle with a wide mouth and the size of the container should be about 4 times the weight of the plum fruits. So the general recipe in Japan is 1 kg of plum fruits so you need a 4L volume container.

How to Make Umeshu Plum Wine?

Choose good ingredients and a suitable container.
If you substitute rock sugar with brown sugar or granulated sugar, shake the container sometimes over a period of time.

How to Enjoy Your Plum Wine

You can enjoy this drink straight over ice, but also you can add cold water, hot water or soda. And also you can dilute it with milk or yoghurt with Umeshu: milk ratio of 1:1 – 1:3.
Plum fruits in the umeshu need to be removed after 1 year as they become turbid and bitter if left longer than 1 year. You can also eat the fruits as it is, but you can make jams and are used for cooking and making desserts too.

Q: Can Umeshu go bad? How long can umesh last?

A: Since it is soaked in high alcohol content liquor, there is no expiration date. Umeshu will mature and increase the depth of flavour with each passing year.

To change the measurements to US customary, click “US Customary” underneath the ingredients list. This converts from Metric units to the customary units used in the USA. 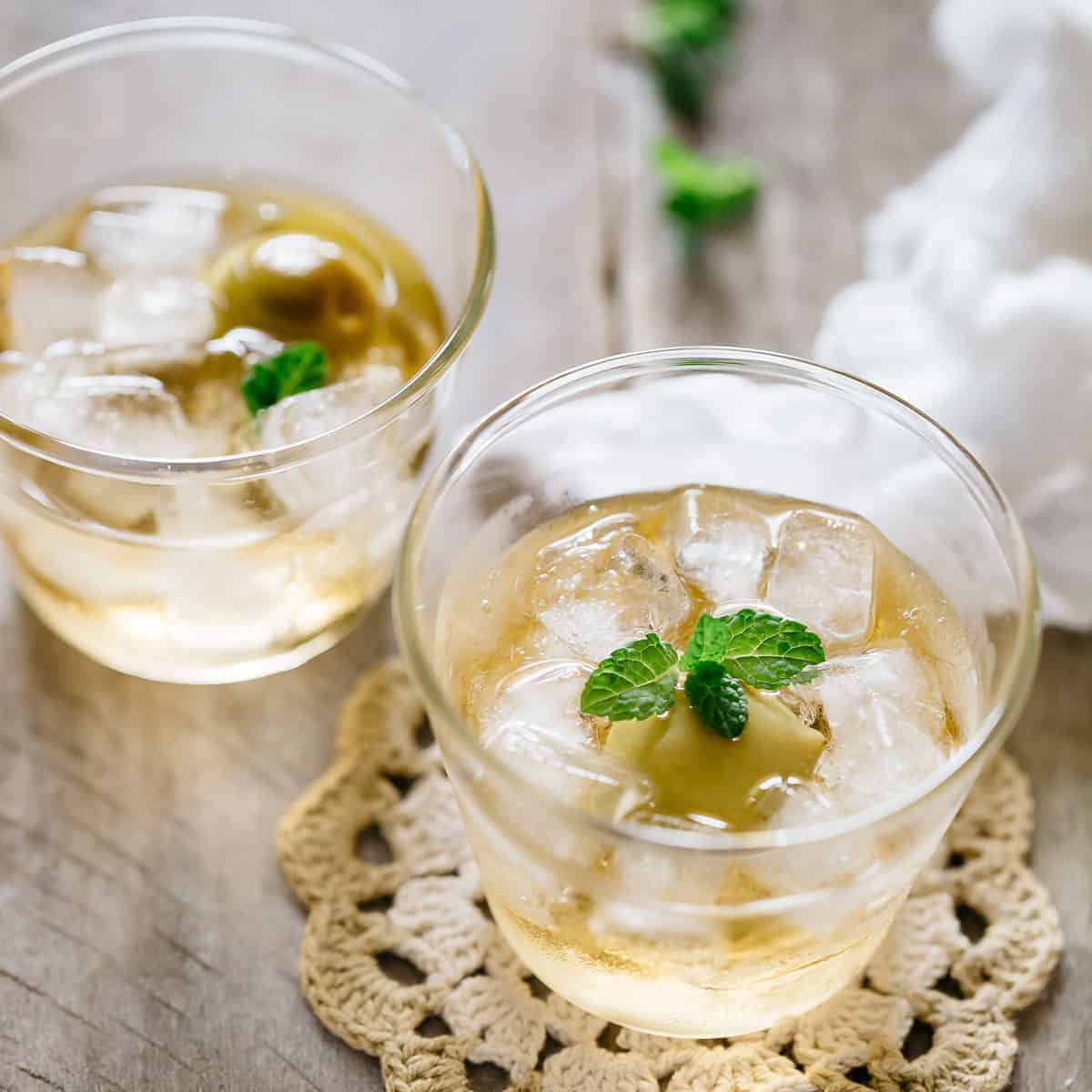 Chopstick Chronicles is a participant in the Amazon Services LLC Associates Program, an affiliate advertising program designed to provide a means for sites to earn advertising fees by advertising and linking to Amazon.com. As an amazon associate I earn from qualifying purchases.